World Premiere of ‘A Bad Night in Los Angeles’

Read about Robert Matthew-Walker’s new piece written for Mark which premiered on BBC Radio 3 In Tune: 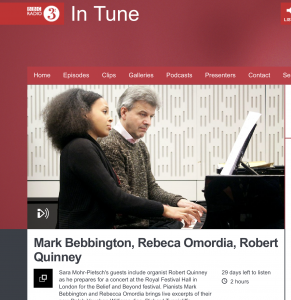 I’ve known Robert Matthew-Walker for quite a number of years and like so many musicians, have always been in awe of his extraordinary musical knowledge…What was less known to many of us was his pedigree as a composer – he was a student of Darius Milhaud in Paris no less ! When Bob agreed to write me a short concert piece, he said he wanted to write something ‘a bit different’ – and that he most definitely did !
Bob found himself working in LA many years ago and happened to wander into a night club at the end of a very long and tiring day…..to his amazement he heard the rock band Azteca beginning their set with the opening sequence of Milhaud’s Concerto for Percussion and Small Orchestra of 1930. As he puts it…’so a potentially bad night in LA turned out well in the end. I hope my piece does, too !’