The piano concertos by Grieg and Delius recorded together on disc for the first time. 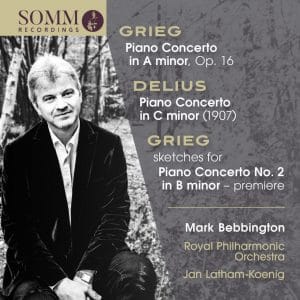 An evergreen masterpiece, an under-appreciated jewel and a great ‘what might have been’ – pianist Mark Bebbington and the Royal Philharmonic Orchestra conducted by Jan Latham Koenig explore the personal and musical connections between Edvard Grieg and Frederick Delius for Somm Recordings.

Heard together on disc for the first time, the Piano Concertos by Grieg and Delius reveal the full extent of the composers’ friendship and mutual admiration. Their music seems to share and exalt in ideals of beauty and tone, scale and sentiment to produce a consummate and complementary coupling.

Composed in 1868, Grieg’s Piano Concerto in A minor has become one of the cornerstones of the repertoire. Its famous opening timpani roll heralds a ravishing display of virtuosity lit up by the melting melody at the heart of an immediately recognisable masterpiece.

Also in a minor key, Delius’s C minor Piano Concerto was inspired by a performance of Grieg’s Concerto in London in 1888. Grieg’s gifting of a copy of the score to Delius spurred him on to write his own Concerto. It was not easily realised, a first draft in 1897 was followed by two further revisions over the next decade before the final version heard here in a rare appearance on disc.

Grieg’s mooted Second Piano Concerto was never completed, but the 150 bars he did sketch hint at what might have been. Robert Matthew-Walker has fashioned the existing material – in various stages of completion and detail – into a coherent single movement to give, for the very first time, the clearest indication of what Grieg had in mind for a work left tantalisingly unfinished. Both this and the solo piano version – also arranged by Robert Matthew-Walker – receive their premiere recordings here.

Completing the disc are Delius’s Three Preludes for solo piano and Peter Warlock’s transcription for piano duet – with Bebbington joined by the young up-and-coming Malaysian pianist Irene Loh – of Delius’s most famous orchestralminiature, On Hearing the First Cuckoo in Spring.

Bebbington said: ‘It is fascinating to see and hear what was in Grieg’s mind as he embarked on this second concerto; certainly the jaunty opening idea shares a similar character to the main Allegro theme of the A minor concerto’s Finale, but elsewhere there are simply tantalising glimpses of what might have been.’

Matthew-Walker said: ‘The sketches, when placed together in sequence, make a broadly coherent single movement, although it is very unlikely that Grieg intended other than a three-movement work. Nonetheless, in hearing those sketches, one after another, flowing as naturally as they do, the listener is at last able to hear just what was in Grieg’s mind at the time.’

The recording, which also includes Grieg’s A minor concerto, Delius’s piano concerto and Delius’s Three Preludes, will be released by SOMM Recordings on 30 March.