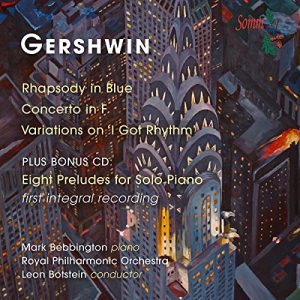 Mark brings his refined and expressive style to a spectacular all-Gershwin CD, with the Royal Philharmonic Orchestra and the Grammy Award-nominated American conductor Leon Botstein. The pair, supported by the RPO in fine form, take a fresh interpretive look at some of Gershwin’s best-loved repertoire – Concerto in F, Rhapsody in Blue and the ‘I Got Rhythm’ Variations. As a bonus, the second CD features the first-ever integral recording of Gershwin’s Eight Preludes for Solo Piano all at the price of a single album.

Anyone familiar with Mark Bebbington’s probing interpretations – which have netted him seven five-star reviews in a row from BBC Music Magazine – and the questing musical explorations of Leon Botstein (currently in his 23rd year as Music Director of the American Symphony Orchestra) will know what to expect. And, says Bebbington, they uncovered unexpected shades among the famous melodies. “There is a real Mahlerian melancholy that lies at the heart of the slow movement of the Concerto,” he says, “and it’s when you take note of those profundities that the fierce joy elsewhere really makes sense.”

Leon Botstein is similarly known for restlessly seeking new truths in works both familiar and overlooked, and he and Bebbington bring the same chemistry to the studio that infused their successful appearance together recently at Carnegie Hall. “Alongside all the symphonic depth and grandeur there is also a heady cocktail of charleston and ragtime, spiked with jazz,” reflects Bebbington, “and finding the balance between all of those elements, the way they live together, has been a fascinating journey.”

This will be a Gershwin recording to remember – fresh interpretations, a premiere, and two fine musicians enjoying every moment.

Back to Recordings
Concertos for Piano & Strings →