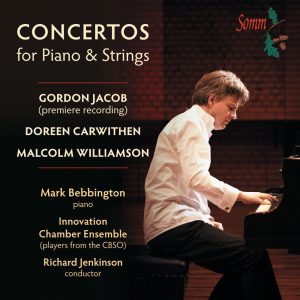 Buy Now
Mark Bebbington is at his imperious, sensitive best in this fascinating triptych of concertos with string orchestra.
Andrew Achenbach

The big news in this valuable and intriguing album is the world premiere recording of Gordon Jacob’s Concerto No. 1 for Piano and String Orchestra, which after it introduced at a Queen’s Hall Concert in 1927 by Henry J. Wood with the Australian-born Arthur Benjamin as the soloist was quietly allowed to slip into oblivion. For those who admire Jacob’s impeccably mannered, elegantly crafted later work, the Concerto’s thorny, hard-driven opening Allegro might come as a shock. Written when the composer was less than a decade removed from the horrors of the Great War – Jacob spent two years in a German POW camp, where he learned that his brother Anstey had been killed on the Somme – it’s music that perfectly captures the exuberant cynicism of the 1920s, just as the subsequent Adagio, with its aggressive, percussive cadenza, is never allowed to relax. Although the final movement begins sternly with some odd, harmonic pre-echos of the music of Jacob’s pupil Malcolm Arnold, the music becomes increasingly friendly after the first appearance of the playful second theme. At no point in its 17-minute running time does this powerfully concentrated work threaten to wear out its welcome. As with so much fine British music written between the Wars, its present obscurity is a mystery.

​Like the painter Dora Carrington, Doreen Carwithen was never particularly fond of her given name; after she married her composition teacher, she was delighted to be known as Mary Alwyn. During an unguarded moment, Richard Hickox – the guiding spirit behind the Chandos William Alwyn series – pronounced her a finer composer than her husband. With all due respect to that brilliant and much-missed conductor, that wasgallante but wishful thinking. Unlike the shorter works on the Hickox recording that reveal a composer of considerable accomplishment and charm, the Piano Concerto – Carwithen’s only major orchestral work – represents a still very young talent trying to master a famously challenging form. While the work drew praise from many – including her husband – a judicious pruning would have helped enormously, especially in the opening movement, which seems to go on at least five minutes longer than it probably should. The slow movement, on the other hand, is gorgeous, with some especially breathtaking writing for the solo violin. The finale is a bit too earnest and (again) long-winded for its own good, but nonetheless rounds out an exceptionally promising work for a composer in her mid-20s.

​Few recent composers rose as quickly or fell as precipitously as the Australian-born Malcolm Williamson, late the Master of the Queen’s Music, whose failure to deliver theJubilee Symphony for the Queen’s Silver Jubilee in 1977 began a series of attacks from the musical establishment that continued to the end of his life. Written in only 8 days, the Concerto No. 2 for Piano and String Orchestra would seem tailor-made to answer the charge that Williamson could be a glib and shallow composer were it not for the fact that it’s one of his most completely engaging works. Written in 1960 for an Australian music competition – it won the first prize of 500 pounds – it is, the composer insisted, “an overtly Australian work aiming at spontaneity and vigor rather than profundity.” As irresistibly catchy and buoyant as the outer movements certainly are, the central Andante lento is among the composer’s most moving, quietly searing inspirations.

​Mark Bebbington’s knowing, enthusiastic performances only add to his reputation as the most indefatigable living champion of neglected British piano music, while the accompaniments, recorded sound, annotation and production values are all first-rate.